I confess I rarely give Christmas presents, but not out of humbuggery or otherwise grouchiness; it’s just not an adhered-to tradition amongst my friends (none of us have much dough anyway, and food and booze shared for Xmas and/or any other reason always reigns supreme). Of course, the exception is my friends B and D who have for years always provided a Christmas experience that leaves Andy Williams in the dust. B makes the rounds Christmas morning and drops off bottles of delicious Port to all of his friends while D works her unparalleled magic in the kitchen. The lucky ones wind up at their house in the evening imbibing in said magic and gifts are exchanged. (Their parties, regardless of the holiday, are legendary).

The night before one such Christmas (In, I think, 2004), I panicked, empty handed, knowing I wanted to do something really excellent for them. Instead, I did what I was capable of, and made them a book about their beloved cat, Van Veen (nick-named Vanny). As you can see, I’m neither a poet nor a painter, but I love butchering both professions,especially if it produces a laugh. Luckily, B and D loved the book so much that they kept it and I got to photograph last week. This was a terrific compliment to me, I must say, because they have so much creativity and talent, that there’s a visible forcefield surrounding their house…Seriously, the fact that they liked the book so much had me over the moon…….

As long as we’re sharing our paintings here on the AWMOK, I’d thought I’d share this….The book pages are cut up cardboard (a duraflame box) wrapped in Christmas wrapping paper. The paintings are poster paint (only 99 cents for almost a liter!) on 8.5 x 11 inch construction paper and everything is held together with 2 ribbons. High class, I know……. 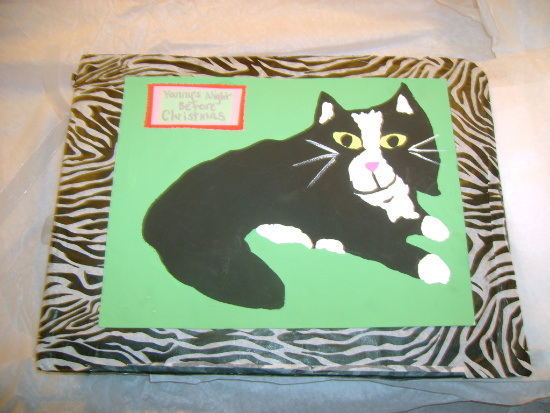 Here’s what it looks like open….I’ll not include all the narration pages for the sake of space; I’ll just narrate above the photo. 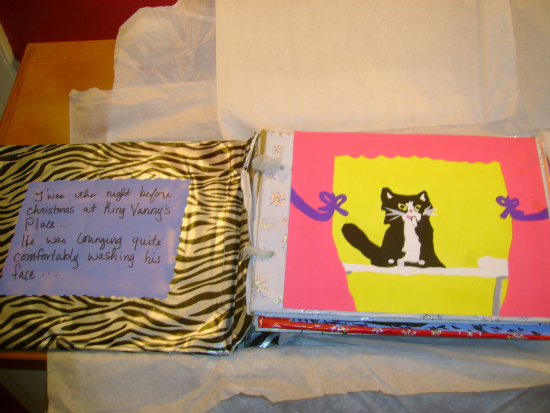 Twas the night before Christmas at King Vanny’s Place. He was lounging quite comfortably washing his face. (He’s on a Mies Van Rohe Daybed) His Mommy was preparing a great Christmas Feast. His Daddy was watching a cool Ape-Like Space Beast. 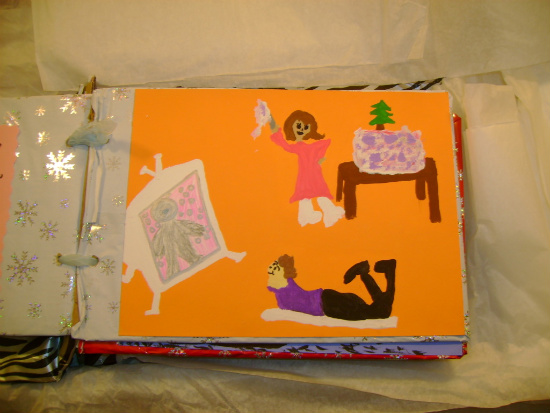 Then his Mommy and Daddy went off to their bed, while Vanny stayed up to watch informercials and shed. And just as Sally Struthers was selling a torch, Vanny heard stomping and cursing on the porch…. “Well”, said Santa, “what would you fancy? A tall dancing girl or a Queen named Sweet Nancy?” 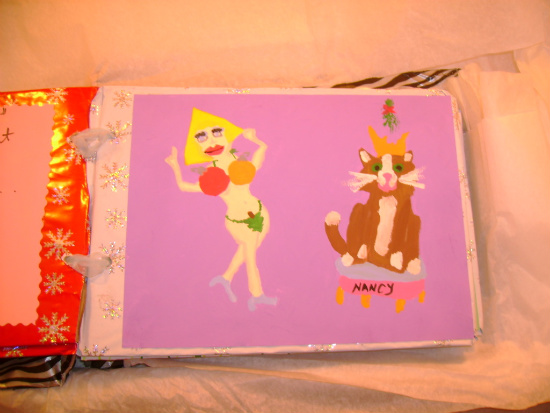 “Or perhaps, King Vanny, you’d be terribly keen to be the brave captain of your own submarine?” “Well, actually, ” said Vanny with a slight sheepish smile, “what I’d really like is some catnip that would last me awhile”. “NO PROBLEM!!!” said Santa, “I have some right here! I keep it quite handy cause it chills out my deer!” So Santa and Vanny spread some good cheer…And rolled in some catnip and guzzled some beer…. 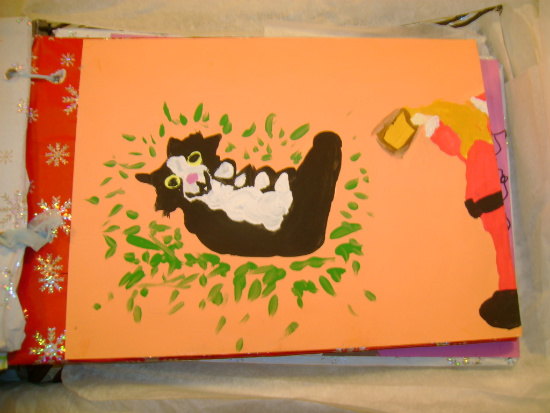 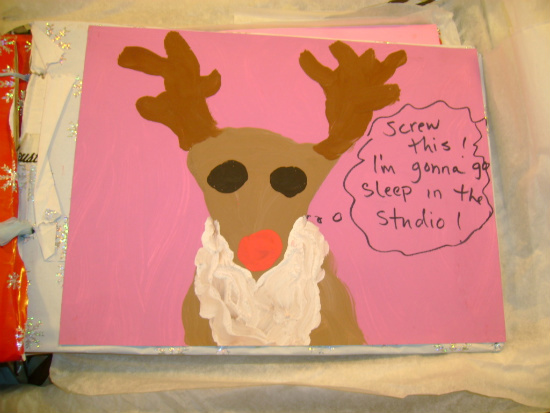 Then early next morning, Vanny’s Mommy did shout, “Bob! Your damn drunken friends are still here passed out!” “For once”, Bob said, “this friend isn’t mine! Why it looks like Santa has had too much wine!” 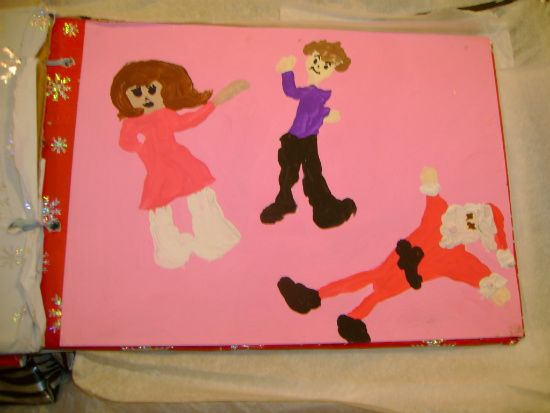 So Bob woke up his deer and loaded his sleigh, and called out as they all flew away….”Take it easy boys, he’s hung over today!” 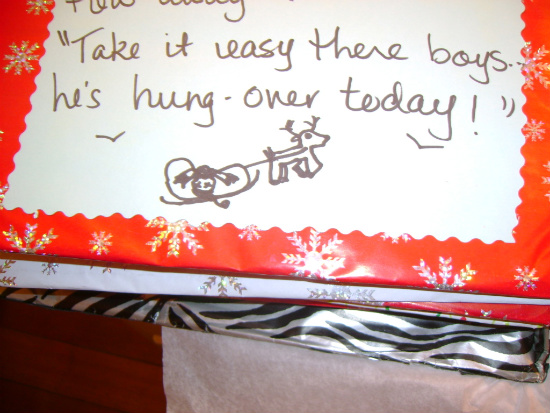 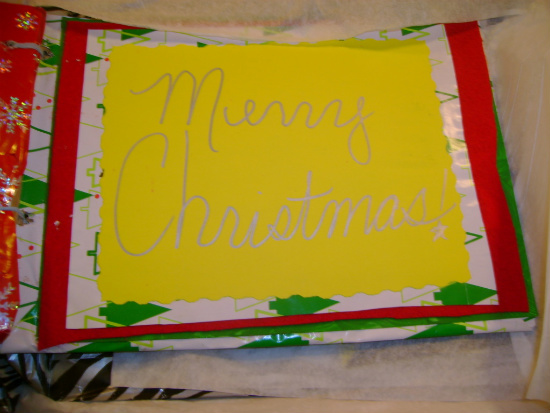 (Bart was their unforgivably neglected neighbor’s cat. He chose B and D and they made his life better than anything he, or any kitty could have hoped for)

Oh yeah, I would like to state publicly, since there has been debate as to the portrayal of the beautiful D’s legs: D has beautifully sculpted, thin, lovely legs that were misrepresented here due to the fact that cheap white poster paint is so thin that all colors show through it.I had to add cornstarch (the hairdresser’s friend!) to it for the white to even be slightly opaque, hence the oversized go-go boots. The paint flagrantly sabotaged my artistic interpretation of a pair of exquisite gams, and for this I am truly sorry. B’s legs, on the other hand, really look like that.

8 Responses to “Vanny’s Night Before Christmas”