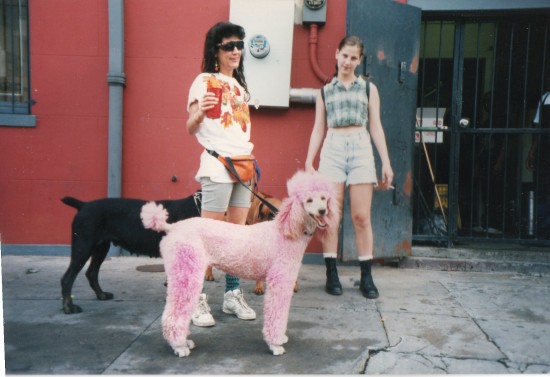 As per a request in a previous thread, i present a fully clipped standard poodle in hot pink. This picture was taken by my friend Dobre’ on an excursion we took into the French Quarter in New Orleans one Sunday. I guess i’d made the trip to go get a muffaletto at the Central Grocery and hit some rekkid stores and dragged her along. As soon as we got out of the car, the poodle and his walkers appeared whereupon she pulled out her camera and got this pic. This was probably 10-15years ago. The building in the backdrop is The Praline Connection, a fine soul food joint down on Frenchmen Street in the Fauborg Marigny. Apologies to the ladies in the pic, i know not who they are. Do gotta say, the poodle is sharp and i think he knows it.