Not sure if this can be considered kitsch, per se, but it’s a pretty wild pic either way. 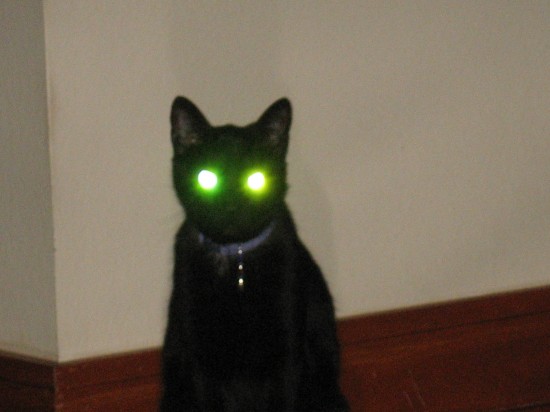 Once upon a time my friend Cathy ran a cat colony at an undisclosed location down Highland Road here in Baton Rouge. At the time there were 15 inside cats. The dynamic among them was pretty wild. There was no need to watch tv for entertainment on visits. All one had to do was pull out the catnip and observe the shenanigans. The camera became a constant bring along when visiting device. This is Lipton. He was wearing a bell at the time as it was decided that all the cats should wear bells. That didn’t last too long.  Once we discovered that the camera, set on nightime picture setting, could take such photos, many cats were “flashy thing’d”, a term taken from Men In Black. Take camera, aim at a cat, once you see the glowing eyes take picture. This is one of the results, no retouching or photoshopping was done to the picture. To our knowledge, no cats were harmed during these episodes, though we did think about it…and did it again to the next one that happened along….