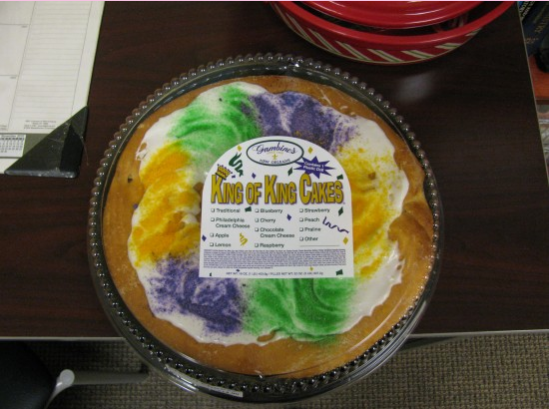 Twelfth Night is the twelfth night of Christmas, Feast Of The Epiphany in Christendom, January 6th, and also the first night of Carnival Season culminating in Mardi Gras Day. One of the traditions here in South Louisiana is King Cake, a fine concoction sorta like a large cinamon roll covered in purple green and gold(the official colors of Mardi Gras) icing. Mmmm tasty. This specimen is from Gambino’s Bakery. Just about all bakeries and grocery stores here have their own varieties. This one is cream cheese filled and was quite good. There are also King Cakes filled with a variety of things such as strawberry, blueberry, just about any filling one can think up and bake into a cake. The picture is actually from January 7th. I came into work on the 6th without one, mentioned that fact and was told i’d better show up with one the next day and did. There’s a plastic baby baked inside. The deal is whoever gets the baby gets the privilege of bringing the next King Cake. This year the season is especially long as Mardi Gras Day is March 8, about the latest date it can be according to some weird calendar figured out by the church. 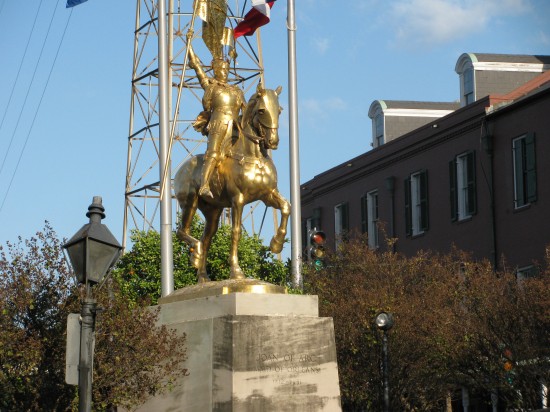 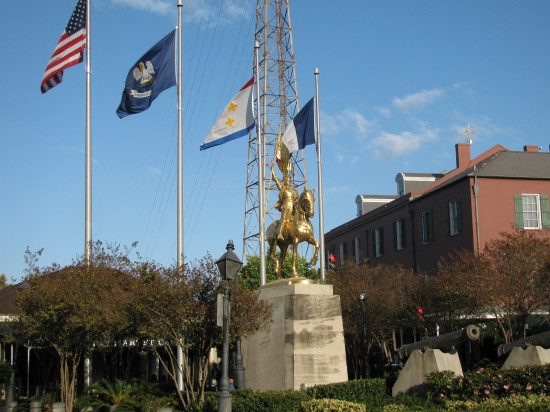 …and here we have Saint Joan Of Arc herself to continue and follow up on a couple of posts from a month or so ago. As it turns out January 6th is Joan of Arc’s birthday. She’s the patron saint of New Orleans(along with the lesser known Saint Expedite) and this statue is located down in the French Market in front of what used to be Coffee Call, the building right behind her in the photos. The inscription reads Joan Of Arc Maid Of Orleans 1412-1431. The four flags in the lower photo are four of the flags that have flown over Louisiana, the United States flag, the Louisiana state flag, Spanish and French, from left to right. “Looka! dat’s Joanie on Da Pony!”……….

2 Responses to “Twelfth Night, King Cakes and Joan of Arc”