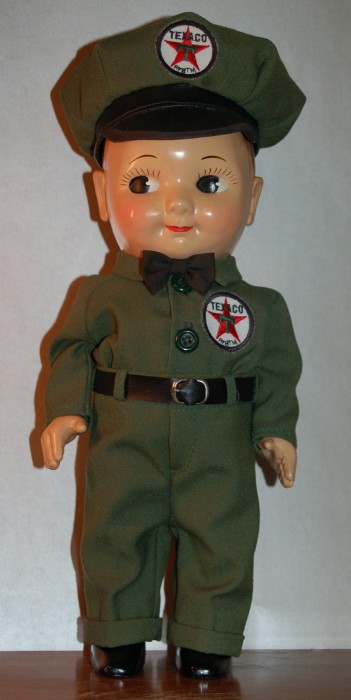 After being inspired by the Gas Station Bathroom ‘museum’ of Michael Ely, I decided to add to the theme with Buddy Lee. I wasn’t sure if this was kitschy enough to include in the Allee Willis Museum of Kitsch, so I tried to delete it but couldn’t. I decided to submit it anyway since it’s one of my favorite dolls in my advertising collection and wanted to share it here. If it is kitschless it will never be in the Museum, so here goes…

From 1920 to 1962, Buddy was the official mascot of the H.D. Lee Company (Lee Jeans, et al). In the beginning he was made of breakable composition material, but from 1949 on (which includes this Buddy) was made of hard plastic. The composition Buddys stand 12 1/2″ tall, while these versions are 1/2″ taller.

Buddy Lee was originally created as a display doll to promote Lee clothing. The Lee Company encouraged those businesses to sell the Buddys when they were finished using them for display, but public demand became so great that eventually Lee Company provided dolls for them to sell. By 1962 the company could no longer afford to make Buddy Lee dolls, so he was retired from production.

Although retired, he was not forgotten. In 1998 he was resurrected as Buddy Lee “Man of Action”, and starred in a series of television commercials for Lee Jeans; and after the World Trade Center tragedy 2001 was seen in a commercial for the American Red Cross, promoting blood donation.

Here’s one of my favorites:

And the Buddy Lee Story:

Over the years Buddy Lee has been manufactured in numerous different outfits. He’s been dressed as a gas station attendent (Texaco, Shell, Phillips 66, MM service station, and Standard Station), soda delivery man (Coca-Cola), John Deere rep, farmer in plaid shirt and jeans, also a cowboy, and railroad engineer. According to the book Advertising Dolls Identification and Value Guide (by Robison and Sellers), the Lee Company says there are seventeen outfits altogether.

This Buddy Lee Texaco doll is all original, his uniform complete including the often-missing belt, bowtie, and hat. Identifying markings are the words “Buddy Lee” in raised block letters across his back. The Texaco uniform is thought to be one of his rarest outfits.

One of this Buddy’s ventures into the outside world was to the most recent Tucson Doll Show where he later returned home unscathed, with a first-place blue ribbon.