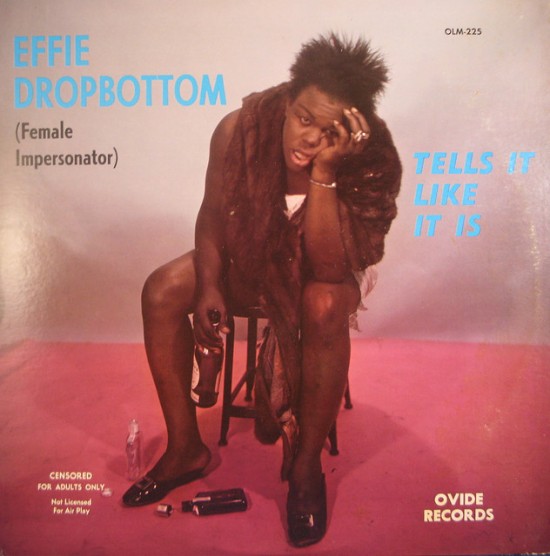 Effie Dropbottom was born in Oklahoma City and got the showbiz fever at an early age, but his parents turned their thumbs downs on it until’ Effie himself felt he was old enough to go cut his own way in life. Singing was out, as far as Effie was concerned, so he turned to comedy and female impersonations. He lived in Houston, Texas for many years where he played at numerous clubs like Betty’s Playhouse. When he made his entrance it was always hilarious, dressed in a costume that only a person like Effie could dream up, he would keep the audience on the edge of their seats and in stitches until he was through. Effie played some of the largest night clubs in the states thrilling audiences with his saucy jokes and weird dances. He appeared on the same bill with the likes of Bo Diddley, Little Willie John, Katie Webster, Sonny Boy Williams and Lavell White. In 1965 he put a show together and went up to Fairbanks, Alaska where he performed for three months. In his spare time he would train Shake dancers, Go Go Girls and also teach his sister female impersonators how to walk, pose and learn how to captivate their audiences. He was once asked what his secret was to staying on top of his game and he said “Never miss a gig, always be on time and give the show all you’ve got.” Effie’s album ‘Tells It Like It Is’ was issued on a small label that was based in Houston called Ovide Records in 1968.