And to backtrack to St. Charles Avenue a bit as i forgot to put this in Pt. 2. This is the Beouf Gras, the Fatted Calf, symbolizing the “giving up of the flesh” for Lent. http://www.youtube.com/user/BatonRougeBill?feature=mhum#p/u/14/-oFA3urJoXY It’s kinda cool the way he blows smoke out his nose…

We’ve laid down our burdens down by the riverside and washed our hands in the muddy waters of the Mississippi River. Will turns to me and says let’s go up to Kevin and Haydee’s place. Wow! yeah! i thought they had moved! These folks have an apartment in the Lower Pontalba building flanking Jackson Square and are the oldest continually occupied apartments in the US, construction being finished around 1856. The Lower Pontalba building is owned by the state, the Upper Pontalba by the City of New Orleans. This place is too cool.  The apartment we’re going to is on the third floor and overlooks Jackson Square with the Mississippi River on the left, the Upper building across the square and the Cabildo, Presbytre and St. Louis Cathedral on the right of the square facing the river. 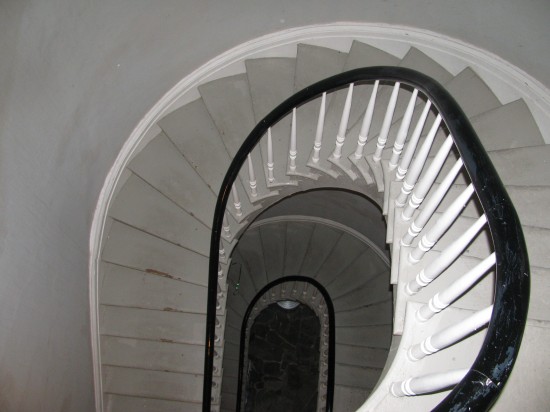 You enter the building from St. Ann Street, walk across the flagstone paved entry way to a circular stairway rising up to the third floor. This view is from the 3rd floor landing all the way down. One year a group of 10-12 of us made the trip to the top. The first person’s foot stomped on the first step, all of us fell in line and stomped in unison all the way to the top, ahh-ing and oom-ing along the way. The echo all the sounds made the hair on my arms stand up. 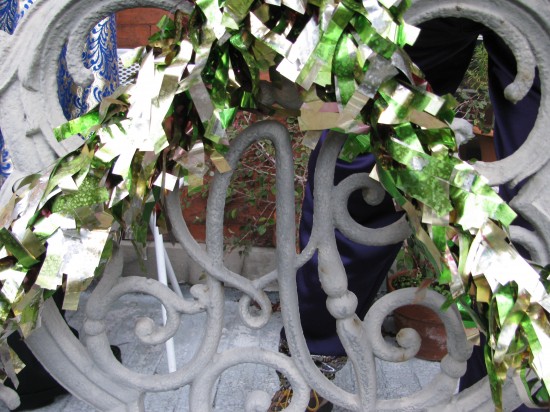 What we have here is a wrought iron “AP” which stands for Almonester-Pontalba, after the Baroness Michaela Almonester Pontalba, the builder of the apartments. It’s out on the balcony which is all of maybe 3 feet wide. Bill sticks his camera over the edge for this shot and gets his leg in the pic.

More costumes…i learned long ago that one should go to the Mardi Gras in costume, you’re either part of the show or you’re a spectator and it’s infinitely more fun to be part of the show. 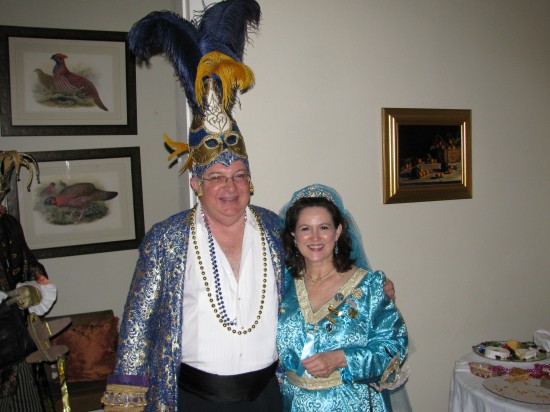 Our hosts, Kevin and his lovely wife Haydee. 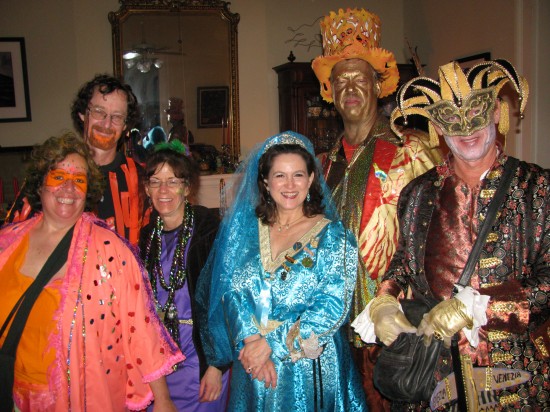 Some of the Baton Rouge Krewe. Mim, Skip, Melanie, Haydee, Terry, Will 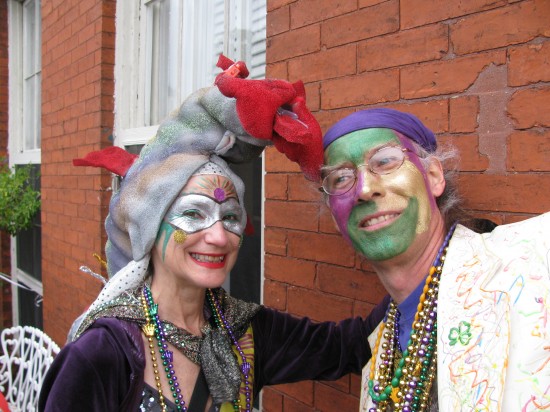 Dobre and Bill out on the balcony. She’s a Radiated Fishhead, a former Queen of MOMs(2004) and the one who showed me how to take a picture like this, “just stick the camera out and snap it” or something along those lines… 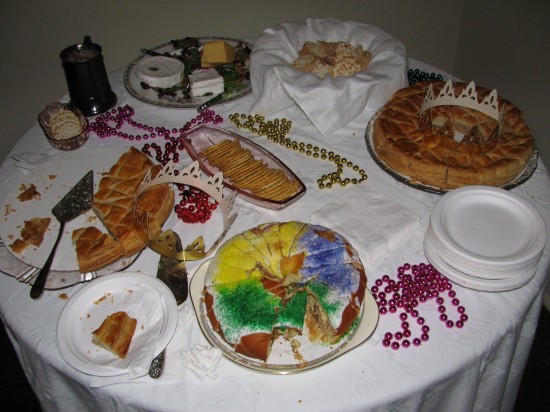 At 12 o’clock are your standard cheeses and crackers. At 6 o’clock is a traditional King Cake of the cinnamon roll variety and at 2 and 8 o’clock are King Cakes also. These are of the original variety. They are filled with an almond spread with thin dough(fila?) over and under as seen in the next picture and yes, once again, quite tasty. I’d never had one like this before. I had seen these up here on previous Mardi Gras Days and thought, in my food ignorance, that these were either a quiche or pate of some form, duh, boy howdy have i been missing out! That’s why they’re called King Cakes, food fit for a King or Queen. 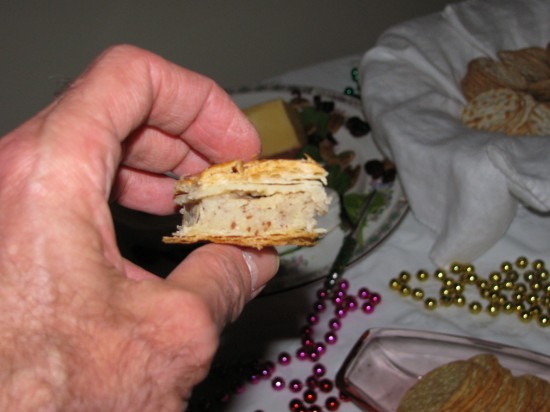 Then it’s off to see more of the show on the streets. We head down toward Frenchmen Street for that large gathering where we see more costumes along the way… 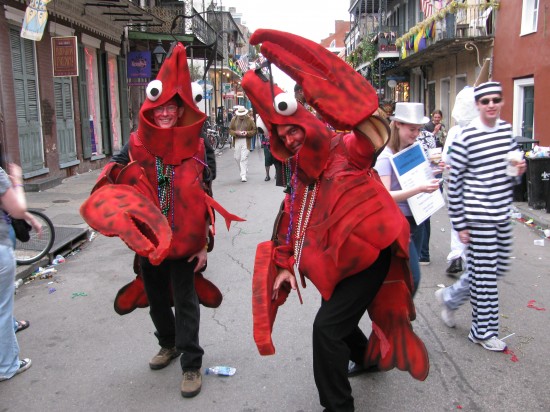 Crawfish people…better watch out, y’all might get boiled cause it’s that season. 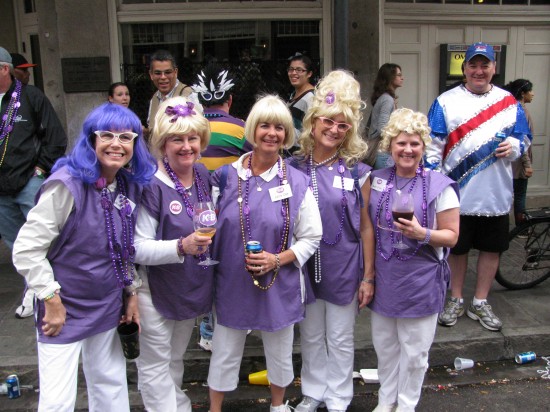 These ladies were dressed as K&B(Katz and Besthoff) employees. K&B was drugstore chain in New Orleans and South Louisiana that was bought out by Rite Aid a few years ago much to the chagrin of all the local folks. Pretty much everything sold at K&B had their brand on it from ice cream to liquor to ice trays and that huge glass second from the left is holding. The whole place was kitsch and it’s loss is still lamented. 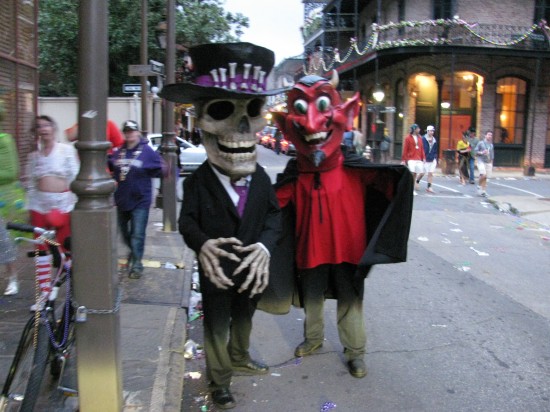 These costumes remind me of the picture BeeJay posted from Europe. They’re cousins if nothing else…

By this time the sun is going down, we’ve walked around 5-6miles and it’s time to head back to the car back all the way across the French Quarter and call it a Carnival Day. The weather has held out and we haven’t gotten rained on all day until we go to cross Canal Street when a few raindrops start to fall and we pull out the rain gear. I guess the Mardi Gras Indian prayer for Shallow Water(no rain) was answered…. 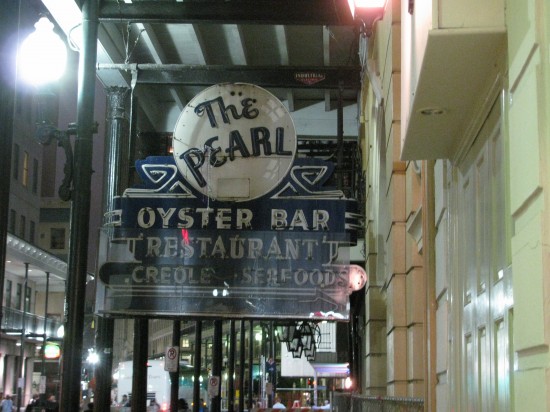 ….and yet more neon though it’s not lit up, in the first block of St. Charles Avenue after crossing Canal Street.

“Get back home, we’re gonna kneel and pray/We had some fun on the holiday”- Meet The Boys On The Battlefront, Wild Tchoupitoulas