Not the kind of sign one sees every day…

Even though this is not necessarily kitsch,this is definitely not the kind of sign you see every day, even around here. I took this shot Monday afternoon May 16, 2011. I thought y’all might be interested in one of the big stories happening in the country at this time, the great Mississippi River flood of 2011. This shot was taken at Scott’s Bluff on the campus of  Southern University here in Baton Rouge. Scott’s Bluff is pretty much the highest point in the parish and it’s right on the river. This spot will not flood unless it’s of biblical proportions which is not likely to happen at this point with spillways open, much land flooded and all animals of every shape and size running away from the high water in the Atchafalaya Basin 25 or so miles to the west. The reptiles referred to in the sign are snakes and alligators, yeah they’re in the swamp just to the right out of the picture. Needless to say, i’d never swim in the river even when it’s much lower, the currents are unbelievably strong. 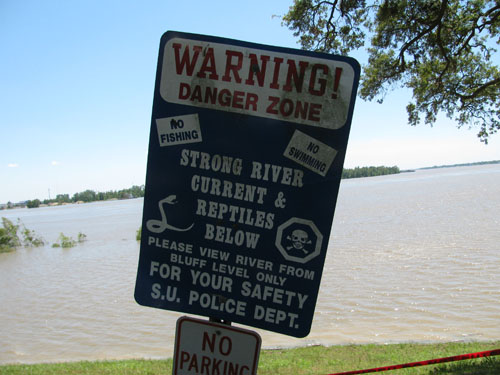 For reference, this is looking due west, the river flowing west to east in the right portion of the picture. It takes a hard right turn at the point where the trees are on the far bank just to the right of the “No Swimming” warning, then flows due south. The trees in the foreground to the left of the sign in the water are usually right at or near the river bank. They’re under 12-15 of water right now. The following link is to the 6minute video i made of the excursion i made that day starting at Scott’s Bluff, continuing on to the parking lot at Hollywood Casino and finally on to the observation deck at the Louisiana State Capital building. It was just a bit windy that day, apologies in advance for the wind noise.