A Harrowing Trip into a Den of Kitsch

I’m not sure where to start with this one. I was even conflicted about submitting these videos since I’m not sure if they are truly kitsch or merely mind bending. I suppose we AWMOKers can argue about it later, that is, if any of you ever speak to me again after sitting through these vids. I ask for your forgiveness in advance! :D

Having (though very long ago!) been able to cut a rug or two myself, I can assure you that it is a choreography no-no to sit very, very still for several measures of a song…But then, here I am sitting on my couch like a slob while this amazing guy is on stage, so who am I to spew criticisms?! Luckily, the rest of his moves save the day…not to mention the amazing musical scoring paired with lyrics that might have well been pilfered from Shakespeare. You know you’ve made it when someone announces your song mid performance. 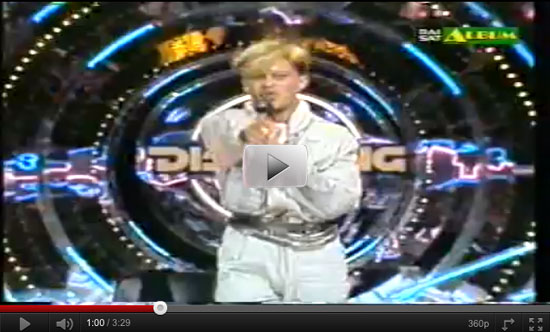 As if that wasn’t enough (Trust me, I’m holding back here; there are seemingly infinite videos of Den Harrow to choose from.) well, why not accompany a lack of musicality with a pair of jeans hoisted so high up your ass you can’t dance even if the choreographer (erroneously) decides to let you attempt a few kicks and turns? I think my favorite moment is when he dumps the rest of his obviously valuable hand outs on a photographer’s head. Now THAT’S rock-n-roll, baby!!!!!!! 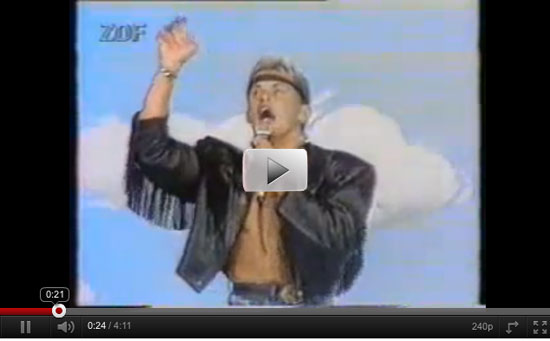 OK, Last one, I promise. I just couldn’t resist. At the risk of insulting our divine Queen of Kitsch, I think the song writing award goes to this little number. You can’t argue with: There are blondes and brunettes/ just like different cigarettes/all their lips are burning hot (furious, jarring, knee dropping, fake mic hand switch!!!) some dress down in chinos/ others wear T-shirts to show/what a shapely bust they’ve got. If you ask me, it shows total commitment when a writer changes the accent and emphasis on a word in an attempt to make it work rhythmically. In this case, I think it’s extra cool that the word of choice is T-shirt….But it’s still cooler yet that the song contains the word “chinos”, especially when it’s used to contrast dressing down with showing off a shapely bust in what is thus implied to be a very dressy t-shirt…

The song title works for me. Apparently, this person is a boy and yes, this is bad. 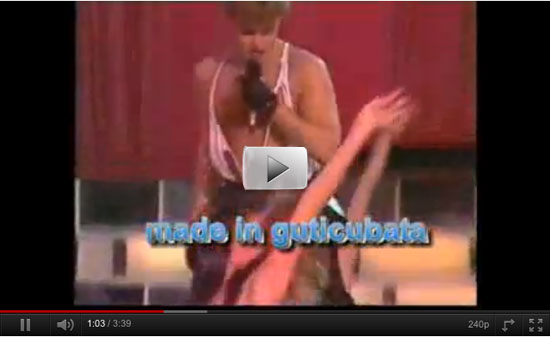 14 Responses to “A Harrowing Trip into a Den of Kitsch”