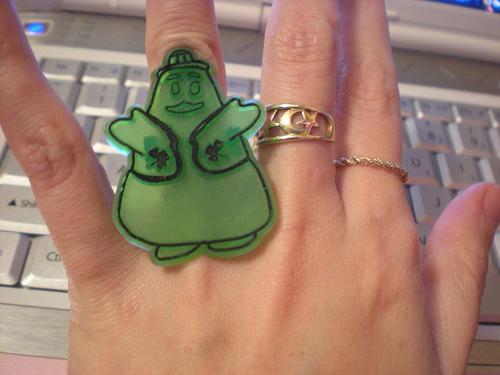 In the 1980s, McDonald’s gave “Grimace” a green uncle from Ireland named “Uncle O’Grimacey.”  He brought the magical green-minty ooze to McDonaldland known as the Shamrock Shake.  I figure I got this ring with a Shamrock Shake as a kiddo, but I’m not sure.  It features Uncle O’Grimacey himself.  It still fits!  Anyway, I was nuts about the things back then, but I can’t stand them now, plus they have about a million calories.  The ring is pretty cool, though.  Also, I heard that this year the Shamrock Shake is going nationwide for the first time in history, instead of being in just certain regional locations.

One Response to “Uncle O’Grimacey Ring”