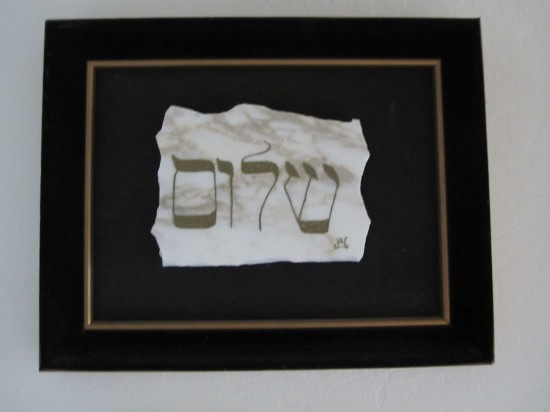 Sometimes it’s hard to be a Jew is a world full of goyishe kitsch. The goyim have Santa Claus, the Easter Bunny, velvet Jesus, bathtub Madonna, Billy the Big Mouth Bass, and those nice laquered wooden plagues with the picture of a beach and that “Footsteps” poem. OK, I know Billy the Big Mouth Bass isn’t technically a piece of Christian iconography, but seriously, how many Jews go fly-fishing?

Every so often, a gem of Judai-kitsch appears at a garage sale, begging to be delivered to the promised land. Here is one such piece – the velvet Shalom! Mounted on a velvet backing, with a velvet frame, this piece of marble is inscribed with the Hebrew word “Shalom”, meaning peace. Could it be hewn from the Wailing Wall? Or perhaps Masada? And why does the shape bare a vague resemblance to the state of Oregon? Is this some form of clue for the next sequel to The Da Vinci Code?

One Response to “Shalom!”