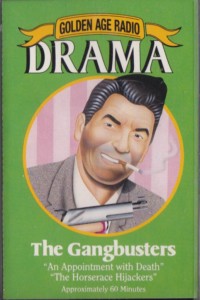 Long before Ronald Reagan became a movie and TV star, his very recognizable voice was used on commercials and acting in radio. At a garage sale, I found this audio tape of two performances on “Gangbusters”, “An Appointment with Death” and “The Horserace Hijackers”. In addition to his voice, the caricature on the tape is unmistakable.