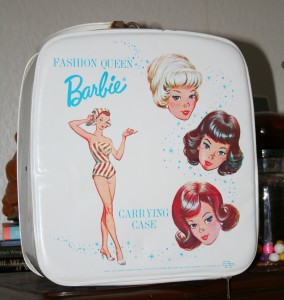 I began collecting vintage Barbies because my older cousins had owned these pre-1970s dolls. I coveted the Fashion Queen Barbie [1963 – 1965] which had molded, painted hair, came with three wigs, and this cool vinyl case. Well into adulthood I thought of this doll. I went looking on ebay and my journey down the long, dark road of addiction began. 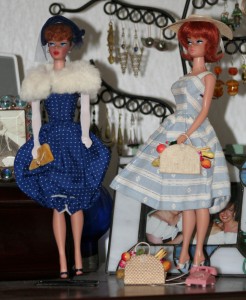 On the left is a Titian Ponytail Barbie [1962 – 1966] wearing Gay Parisienne #964 (1959). This is a rare, hard to find, outfit. I had to collect this one piece by piece. On the right is a Fashion Queen Barbie, the wig is new, wearing Suburban Shopper #969 (1959-1964). While not considered rare it is a more valuable ensemble when complete with the straw accessories in mint to excellent condition.

11 Responses to “all things barbie”