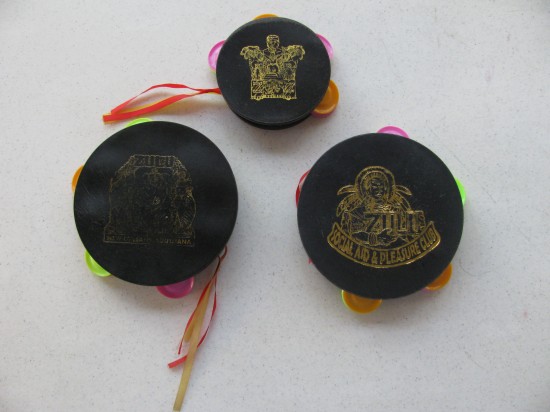 Much has been documented about the Zulu Social Aid and Pleasure Club in New Orleans. The parade is the big deal on Mardi Gras Day, starting at 8:30am and preceding the King Of Carnival Rex. The coveted throw during the Zulu parade is the coconut, highly decorated. Some are real, some are plastic. I’ve gotten both but we’ll focus on one of the other throws here, the tambourine, a rhythmic necessity for such a festive day, ya gotta have something to make noise and keep the rhythm with so i will grovel for these as well as doubloons but that’s another story.

The one on the bottom left i persuaded a fellow parade goer to give to me as she had two and i had none and was the first one i ever got. Such is the generosity on Mardi Gras Day. Once i got one, i knew i had to add these to my list of gotta get throws. That one had been played/beat on a bit and it shows. The other two i got myself and have tried to treat them gently as i don’t want to wear off the design too much with the fingernails. They all sound great for cheap plastic percussion devices, they have that unique element of SOUL added to the plastic. And they have to be “headed” tambourines, i’m not going to beat the base of my hand into submission with a non headed one, i’d rather break fingernails. All the Mardi Gras Indians have headed tambourines in their repertoire of percussion instruments. You have to keep the beat on the street while you’re parading….more to follow…..